I never like to sit and read. As soon as I notice how thick and how tiny the words are written, I get bored already. But I taught her to read, and I learn to put dramatic effect on my voice when story telling. That was when she was little, and I can’t do it now, because she doesn’t want me to ruin the story. She would push me to read. She will leave the book right where my seat is at the dinner table. I know it is due to be returned but she won’t do it. She would check if the bookmark has been moved. I told her that I don’t understand some words, if everything is written in basic or simple English I will probably read a lot. 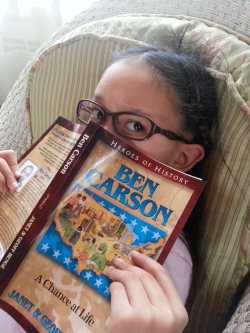 Reading one of Ben Carson’s book. She thinks, he is a brilliant genius.

I find it boring and not interesting because I struggle. It happened many times, when she have tears rolling to her cheeks (literally) or laughing and I just keep on reading without realizing we’re on the climax of the story. Climax, I learned that from her. I would probably use “height” or “thrilling part”. When I hear her say with a look of disappointment , “Mahhmm!”, I probably mispronounced the word “people” as “peepool”.

And since I let her check this journal right at this moment where she is standing beside me, she wanted me to add that the climax is the turning point of the story. Another learning point for me with this kid. She does what I asked her to do and that is to check my grammar and vocabulary.

By the way,  I finished the two books she recommended me to read. She must be proud. LOL!

(She asked me to delete the word LOL because this journal is formal writing not informal writing, according to her, and I don’t need to write slang words. “What if the President of the United States read your journal or whoever the readers are?” She currently is doing formal writing about chocolate milk if she is against it to be banned in school.)

Her way of relaxing.

I was inspired to write this journal after I googled the word epitome which was on one of my friend’s comment on my Facebook post. I realized that if I read more, I would probably develop good grammar and increase my vocabulary.